This article first appeared at the Supernatural Sisters blog, March, 2011.

Week in and week out, the Winchester boys kick some monster ass and deal with angsty family issues, all the while driving one heck of a cool car. Not too long ago, TV critic Maureen Ryan called the show “unheralded but excellent . . . packing meaty thrills, dude-tastic humor, and solid storytelling into each episode.”

While it’s easy and fun to get caught up in the Padalecki-Ackles axis of eye candy and the classic rock soundtrack, the show also, as another reviewer points out, “effortlessly mixes traditional horror along with schlock and B-Movie” thrills, while “[S]imultaneously parodying and honouring the genre at the same time…”

In other words, we wouldn’t get to so often watch the brothers Winchester flex their muscles if it weren’t the tremendously creepy and formidable monsters they’ve had to face down. After all, a hero is only as good as the dragon he must slay. So, while we wait for Supernatural to return, let’s take a look at the top five most dangerous, nasty and creepiest monsters Sam and Dean have had to fight yet.

The vampires of Supernatural aren’t the beautiful and flawed fiends à la Ann Rice and Paranormal Romance. (The exception to this rule is, of course, Dean’s brief stint as an undead bloodsucker.) Nope, these monsters have several rows of nasty looking fangs rather than two elegantly sharp incisors.

They infect others virally with their blood and younger vamps often cart victims off to their nests to be enjoyed by vampire elders for weeks. These immortals can smell human blood and hear a heartbeat a mile away.

In “Dead Man’s Blood,” Daddy Winchester said that a vampire has a person’s scent for life. The only way to kill a vampire is by beheading – and the Colt, of course.

The scariest aspect of a wendigo is that it was once human, but after embracing cannibalism was transformed into a monster that craves human flesh. They can mimic the voices of humans and are impervious to knives and guns.

Wendigos are described as standing over fifteen feet tall and possessing glowing eyes and yellow skin, as well as overly long tongues. The only way to kill them is to burn them to death.

Thomas Benton creeped me out so much in the episode “Time is on My Side” that he deserves his own entry. A doctor in the 1800s, Benton discovered the secret to becoming immortal. It’s simple, really. Just steal other people’s organs when yours wear out.

If you wake up in a hotel bathtub full of ice with one kidney gone, blame Doc Benton.

John Winchester cut out the man’s heart years ago, but that didn’t stop the doctor, nope. Benton kidnaps Sam with the intent to harvest his organs and offers Dean a chance to avoid Hell by joining in his immortality.

Not your average genie in a bottle, djinns in the Supernatural universe can pass as humans, but in their true form have tattoos and scars over their entire bodies. Their eyes glow blue when they attack and they possess superhuman strength.

Rather than granting wishes, they poison their victims and convince them the hallucinations that result are the victim’s dreams come true. In the meantime, the djinn feeds on the blood of the victim. The only way out is for the victim to commit suicide in their alternate reality. These cave-dwelling monsters can only be killed with a silver knife dipped in lamb’s blood.

Nicknamed the “twelve inch long herpe” by Dean, the Khan Worm was created by Eve and enters a person’s body through the ear. Then it controls their actions, which usually involves killing the victim’s friends and family.

The only way to remove a Khan Worm is to electrocute the victim near to death. This monster isn’t really scary until you see it—on the floor in a puddle of icky goo.

Then it just gives me the heebie-jeebies. Reminiscent of the Centaurian worm from Star Trek and the Ceti eel from Star Trek: Wrath of Khan, this worm looks like a freaky cross between a snail and an eel. Plus goo. Ewwww.

I need to wash out my brain now, thanks. As I mentioned above, just keep in mind that without all that scary stuff, we wouldn’t get to watch Sam and Dean sending these nasties packing. Case in point:

What about you? What do you think is the scariest monster on Supernatural? What’s your favorite Sam or Dean monster fighting moment?

Lisa Paitz Spindler is a science fiction author, web designer, blogger, and pop culture geek. Her debut space opera novella, THE SPIRAL PATH, will be released March 28, 2011, from Carina Press. In addition to some fun science underpinnings and a moving love story, readers will find a bonus deliciously creepy character buried deep in a mysterious wormhole.

She also contributes book reviews and television recaps to SF Signal and maintains the Danger Gal Blog hosted by her alter ego, Danger Gal, whose stiletto heels are licensed weapons and whose ninja stars travel faster than light. Lisa can also be found on Twitter and Facebook.

As part of her Out Of This World Blog Tour, Lisa is giving away a copy of THE SPIRAL PATH and this Retro Saturn T-shirt to one lucky reader. Everyone who enters will receive a door prize: THE SPIRAL PATH electronic trading cards depicting the four main characters in the story. 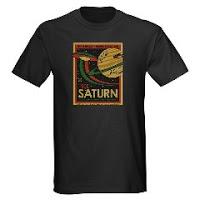 On Sunday, April 3 Lisa will draw the winning name.

This site uses Akismet to reduce spam. Learn how your comment data is processed.